Ahimsa in Action: A Calling In for White Folks

We at IYDC are anguished by the recent and ongoing killing of Black bodies. We grieve for the families of George Floyd, Breonna Taylor, Ahmaud Arbery, and countless other Black folks who have been abused by or lost their lives at the hands of the system of white supremacy and the movement of white nationalism. As white Iyengar yoga practitioners, we want to urge other white folks engaged in the art, science and philosophy of Iyengar yoga that doing nothing is unacceptable. We must take action for racial justice, now.  Not doing so is equivalent to supporting the powers that be and the status quo. It’s time to read, to study, and to stay informed.

Now more than ever is a time to reflect upon and embody the yamas--the universal moral disciplines that govern how we interact with others in the world. We invite you to think about the yama aparigraha, or non-hoarding or non-coveting when more attention is paid to looting than to loss of Black lives. As the Hampton Institute put it, “It is humanity demanding to be recognized.” We invite you to listen to Black leaders and thinkers like Ijeoma Oluo, Austin Channing Brown, Resmaa Menakem; and donate to Black organizations or causes that support BIPOC. Locally, you can donate to IYDC’s Solidarity Fund, which supports our Paid Apprenticeship program for Black students, Indigenous students, and other students of color; the Detroit Justice Center Bailout Fund; Detroit Freedom House. Nationally, you can donate to the Black Lives Matter movement or the National Bail Out Fund.

Right now, it’s important to know that folks of color have different needs than white folks do, and we need to be respectful of this. Let’s talk to other white folks, rather than asking friends and colleagues of color to do the extra labor of educating us. We invite you to our Ahimsa in Action group for white-identified people. This is a space for white folks to learn and act together in order to take responsibility for our role in this oppressive system. We meet next on Friday, June 12th at 6pm. Please email infoatiydc@gmail.com to join us. Yoga gives us the tools to be resilient and to do the hard work of self examination. As white people that includes examining the way in which our society continues to be deeply racist and how we can better act to dismantle white supremacy.

Ahimsa in Action is a group for white-identified folks to meet and find common language around racial justice work so that we hold more of the work around educating and talking to other white folks. We began by reading Robin DiAngelo’s White Fragility together in March 2020. Here are some of our reflections from participants on why engaging in this work in the yoga studio setting works for us:

"Yoga is a practice that helps us to be more resilient, to recognize what is center for ourselves, and to work through difficulties in our lives. As white bodied people living in America, and especially in a majority Black city, we have an obligation to use those same skills to work on the injustice of the world. White Fragility fits into that yoga practice because it asks us to first look inward at our own patterns of hurtful behaviour and the illusions and prejudices that lead to that behavior. It is only after we've examined our own behavior that we can then make ourselves useful in the struggle against racism. The book also provides a very helpful shared vocabulary for our chapter of Ahimsa in Action to continue the conversation about our own behavior and what we see out in the world."
--Alice Bagley

“Having a yoga practice has given me more body awareness and has helped me to notice the relationship between emotions and where they manifest in the body. White Fragility articulated my feelings of discomfort when talking about race, and naming and noticing this reaction has allowed me to more quickly recognize and move through my discomfort in order to stay present in the work of antiracism, rather than being fragile and walking away.”
--Elissa Zimmer

Posted by Iyengar Yoga Detroit at 6:20 PM No comments:

Emotional Energy Centers of the Body

In class this week, I referenced a handout I like to provide, and announced I would put it on the blog. Page 1 was gleaned from an online source I do not have a citation to. I created page 2, which is meant to print on the back of page 1, and offers an affirmative interpretation of each energy center. They roughly correspond with the chakra system. I hope you find much to ponder. Of course, it is not meant to be viewed dogmatically, but with a spirit of curiosity and reflection.

much love in the transformative struggle,
Gwi-Seok 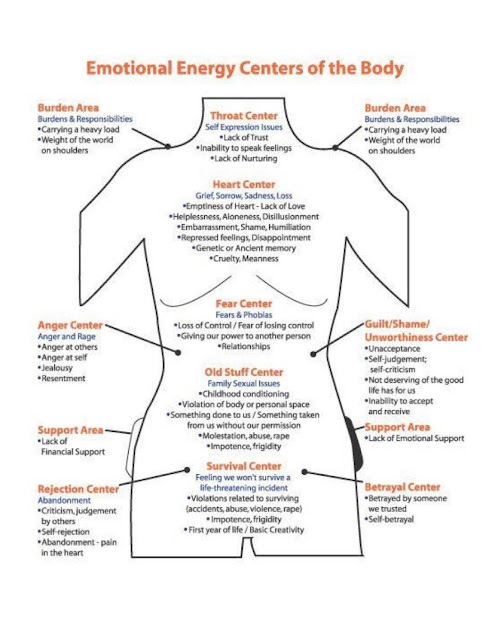 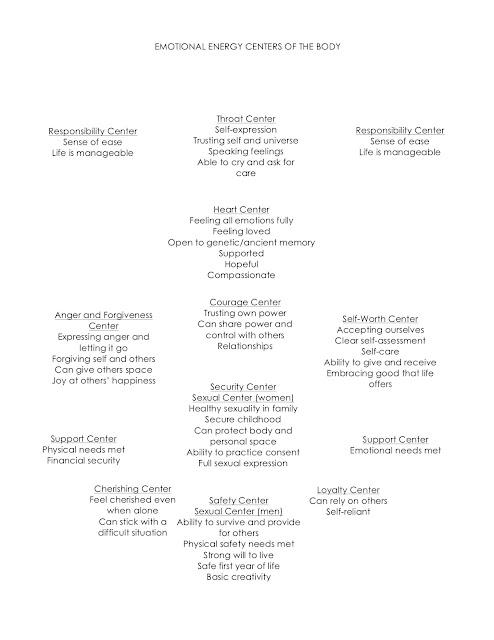 Posted by hong gwi-seok at 6:20 PM No comments: